I've been quiet lately because I've been busy. My year began with a rejection. I sent a story off one day (email) and it came back the next. My mistake? It was sent when the moon was on the wane. That's what I reckon so, in future, I shall only send out work when the moon is waxing. It's a full moon tonight - good for performing spells. Perhaps the key spell should be refreshed so this house sells.
Busy? I decided to clear all the paperwork that's been waiting for attention. I've ploughed through it all this week, at the same time as interviewing authors for a forthcoming article. Life is going to get busier as the new book is getting started on Monday. Not sure when the deadline is yet but I want to get well ahead in case we get a buyer and move house in the middle of writing.
Now the decks are clear I actually feel like working. That paper wasn't just clogging up my office. It was clogging up my brain.
Posted by Lynne Hackles at 10:15 5 comments:

death of a snowman 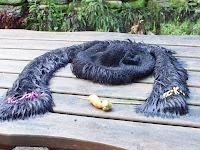 I loved him for a while and then he got boring. It wasn't that my affection towards him cooled, rather that it got too warm. His epitaph has possibly been heard before but here goes -

Now he's dead and gone away

Let's hope the bugger's there to stay.

Here it is! The new cover for my book. This will be what it looks like in its second edition which should be out around June. (buy from amazon or www.howtobooks.co.uk)
I'd grown used to the first cover with its blue sky with little white clouds, like ideas, sailing in it. This one is beginning to grow on me now. Change is always hard for me. Jane Wenham-Jones and I once got quite faint because the table in our kitchen at Writers' Holiday, Caerleon, had been moved so that it faced North to South instead of East to West. (www.writersholiday.net)
There is another change going on and this is one that I've looked forward to. The THAW!
Green looks really strange now. Instead of staring out of my window at white hills, white valley, white garden, there are now patches of green and they look very very bright. The snow has made me lethargic. Hibernation was appealing. Perhaps with the return of green my brain will re-awaken.
Here's hoping.
Posted by Lynne Hackles at 15:16 6 comments: 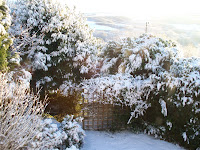 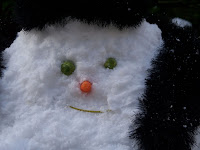 This is a cheat really. It's not a snowman. It's only a head. Why? Because my back seizes up when it's cold so I had limited time outside, and because my back is bad it's difficult to bend. But I so wanted to make a snowman that I compromised. This head is sitting on the picnic table and Mr Freeze is looking through the kitchen windown at me - he was quick to build and involved no bending as the snow was already on the table.
The top picture is the front garden and all that white behind is not sky. It's snowy hills. It all looks very lovely but I don't want to be out there. Perfect writing weather.
Posted by Lynne Hackles at 12:00 5 comments:

Hi! This is Colin, Lynne's husband, also known as the LSO - Long Suffering One. A title well deserved. You see, I didn't marry a writer. She became one. No-one said 'for better or worse, when writing or making your life a misery when not writing'.
Over the years I've got used to rejections, celebrations, tears and wails and all those calls of 'Colin, Colin, I've forgotten the word I want, can't find the disk with the photo, lost the file, can can you read this, check that, do you know this, that and the other.' And the one most often used - 'Are you putting the kettle on?' Apparently this is Venusian for 'I want a cup of tea.' Lynne once gave me Men are From Mars, Women are From Venus to read. It didn't tell me where writers came from.
I also didn't reckon on becoming sort of famous. Apart from being on telly when I was in the audience while Lynne played Deal Or No Deal, I have become a character both factual and fictional. I've made an appearance in a children's book, many short stories, and an unpublished novel (Hell, the stress that one caused me). She's told all and sundry about my parents, my jobs and even my heart attacks. Is nothing sacred? Thankfully, so far, she's not got involved in erotic writing.
And what does she say if I complain. 'But darling, no interesting woman is easy to live with.'
Posted by Lynne Hackles at 10:48 8 comments: