Escape from the screen 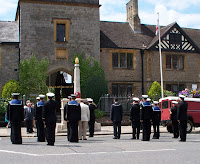 I've discovered since moving back to Malvern that there is life other than staring at the computer screen. In the last place it was all I had to do. Here, I write in the mornings, play in the afternoons and I get more work done than when I worked all day.

On Tuesday our power supply was going to be intermittent so I took the day off and we visited Ledbury. Good choice. Some of the crew of HMS Ledbury were there to lay a wreath to honour the war dead. Their ship is named, not after the 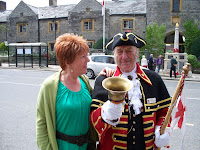 town, but after the Ledbury fox hunt. This is because it belongs to the Minesweeper class, or Hunter.

The Town-Crier was there too. He's called Bill The Bell and I asked if I could have my photo taken with him.
Posted by Lynne Hackles at 08:34