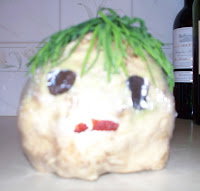 When I’m not writing I like to bake. I fill the freezer with large cakes and small ones, make pies and pasties and get all creative in the kitchen.
When I am writing we’d go hungry if the LSO hadn’t learned to cook years ago.
Sometimes I buy ingredients for a recipe and then never get around to making it because I start writing. So what do you do with an old celeriac and a bunch of wilted chives? You make a little friend!
Posted by Lynne Hackles at 06:52 7 comments: 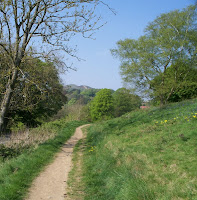 Each night throughout the long winter I have been visualising myself walking again. I’ve had a bad spell when a wheelchair was needed. Now, along with the weather, I’m improving and yesterday managed one of my visualised walks.
The LSO drove up the Malvern Hills and through the Wyche Cutting – a pass between Worcestershire and Herefordshire. We then parked up and walked a parallel path on the hills, no ups or downs, until we reached The Kettle Sings. Don’t you think that’s a wonderful name for a café? And there we had cake and cold drinks and read a few obituaries before returning. This morning my leg muscles are like bricks and my back aches, but I did it. 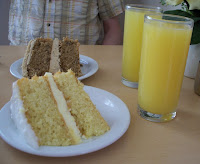 The obits were from the Telegraphs’s Book of Obituaries. My favourite was the self-styled Lady who listed many jobs but drew the line at being ‘a whore or a spy’.
The cake? The LSO had coffee and walnut. I had lemon sponge with inch thick cream filling and lemon icing on top.

I've added before and after pictures.
Posted by Lynne Hackles at 09:15 9 comments:

Next time the circus comes to Malvern I’m going to see it. I’ve often seen the big tent set up on the common but never been attracted, but I am now. After reading Circus Mania by Douglas McPherson, modern circus intrigues me. I’ve learned all about the history of circus – in fact, the circus chronology begins in 329BC. I’ve heard the circus people telling Douglas about their lives. It’s been explained that Laurel and Hardy, Morecambe and Wise and Ken Dodd are all clowns so why are so many Brits clown-phobic? It seems that this particular phobia is a British one. Circus has changed over the centuries and continues to change. The ‘traditional’ circus, the sort I went to as a child, and ‘contemporary’ circus, such as Cirque du Soleil which attracts large sophisticated audiences, are both covered. Actually, all circus is covered. The love of circus and the amount of research the author has put into this book shines from the pages. And for those who automatically link circus animals and cruelty there is an explanation of how loved these animals are and how different official bodies have never found any evidence of animals being mis-treated. Douglas has not written a one-sided book. He has carefully and thoroughly given all sides to every argument. Having had dealing with the Arts Council I wasn’t in the least surprised to hear that traditional circus has to carry on without help whilst some of the new circus troupes get hand-outs for performing acts that baffle the public. Baffle here has nothing to do with ‘How the hell do they do that?’ when watching someone execute a seemingly impossible feat on a trapeze. In this case baffle means, ‘What’s it all about?’ (Someone being a tree. Think Emperor’s new clothes.) Circus Mania is one of those rare non-fiction books that you end up reading as if it is a novel. It has great characters and plots and beautifully written descriptions. Recommended by Lynne! You can save £5 off the recommended retail price by ordering Douglas’s book direct from the publisher, Peter Owen. £10 postage-free in UK (£2.75 postage worldwide). Send cheques to: Peter Owen Publishers 20 Holland Park Avenue London W11 3QU Or phone: 020 7373 6760 (office hours).
Posted by Lynne Hackles at 07:45 1 comment:

I was Millie T Wakefield!

‘Everything except poetry and pornography,’ I answered when asked on BBC Radio Hereford and Worcester what sort of writing I did. That’s not always been strictly true. Last night I remembered when I was Millie T Wakefield producing ‘poetry’ for the local newspaper. Yes, it’s a strange name to pick but at the time I was a shop assistant in Wakefield’s and our opposition was Milletts (Millie T. Get it?) This was many moons ago when I would produce not poetry, more doggerell, for anyone who asked. And then for my husband who complained about his sandwiches being boring. The fillings remained the same but little notes were added, like this one – (you should know first that I have a severe allergy to eggs) This egg I boiled and mashed and spread With some sauce upon the bread. It won’t mean much to some, I know, But to me it means I love you so. When you bite into this sandwich thick, Remember the sight of it made me sick. Yes, it’s bad but these little bits were my first attempts at writing and I gave up ‘poetry’ quite early on. The LSO still has all his little verses. They are now over 30 years old.
Posted by Lynne Hackles at 06:26 5 comments:

Pop over to Frances Garrood's blog. She's holding a competition for limericks. It's under L for Limerick. That's because Frances is blogging her way through the alphabet. K for Knickers is worth a visit too! http://francesgarrood.blogspot.com
Posted by Lynne Hackles at 16:10 No comments:

My brownies are cooling so I've made my way to the keyboard. Today I am being creative in the kitchen. We have guests coming to dinner - our gift-son, Andy, and his partner, Emma. It's an excuse to make some of Lorraine Pascal's fudge brownies. The recipe includes two whole bars of dark chocolate (70% cocoa solids) , plus a whole packet of Oreo biscuits. About a million calories and I'm up in my room so that I'm not tempted to test one, or two, or...
Posted by Lynne Hackles at 09:47 1 comment:

I wore bright red with lime green. Had on green shoes and carried a green handbag along with a copy of Diamonds and Pearls and Writing From Life.
I’d visited BBC Radio Hereford and Worcester several times in my pre-Wales life so felt comfortable there. Andrew Easton was lovely and so easy to talk to, not that I ever have much of a problem talking.
We discussed both books, talked about Deal Or No Deal – he’s a big fan and couldn’t believe anyone could take the risk that I had (10p or £75,000 just in case there’s anyone out there who hasn’t heard. There can’t be.) Malvern Theatres also turned into a subject as I mentioned one of my many jobs was working in the box office there when Nureyev came to dance on his final tour.
The half hour raced by. I had a good time and am now a Friend of Radio H/W. I was even told I’d be asked back.
The only thing I missed was I had to do my own make-up. Clever make-up ladies did it for me when I was on Deal.
And it was nothing like the first radio studio I visited after winning their short story competition, back in the early 80s. A girl sat on the floor under the desk and, while the DJ tried to speak sensibly into his mic’, she plucked hairs out of his legs trying to make him squeal.
Posted by Lynne Hackles at 07:27 4 comments:

Two posts in one day from a not so regular blogger? 'Whatever next?' I hear you ask. Well, a radio chat is next. Tomorrow in fact. I am to appear (can one appear on radio?) on BBC Radio, Hereford and Worcester, on Andrew Easton's show. 2.30 Tuesday 12th April. I'm wondering what to wear. The LSO says it doesn't matter - it's RADIO. But it matters to me. If I look good I shall feel good and will therefore be more confident. Shame it's too late to go and buy a new outfit.
Posted by Lynne Hackles at 14:51 8 comments:

Inspiration in a garden

I saw it advertised in the local paper. A garden open to the public so off we set in this glorious spring sunshine. Moors Meadow was just across the border into Herefordshire, at Collington. We drove up a very long track to it, wondering if we were on, well, the right track. We were and it was worth it. These gardens were established over 50 years ago. I can’t believe I’ve never been there before. They were the magical sort. Not manicured with flowers in rows. No, this garden looked simple and beautiful, which every short story writer will know means a lot of work has gone into it. It had everything I love in a garden. Lovely plants, trees and shrubs (I won’t bore you with the names though I do know lots of them) as well as plenty of wild flowers – violets peeping from beneath trees, cushions of primroses, a few shy bluebells starting to open. Little offshoots of paths led into secret corners. Then there were sculptures, including a pale blue dragon whose name we had to guess. I stroked her long nose and she whispered that she was called Moonshine. And there were plenty of places to sit and admire the views and to wait for the butterflies to settle so we could enjoy their colours too. I should have taken pictures to show you but I forgot the camera. (I can see Simon W shaking his head at that admission.) They are all in my head though and I shall be going back to watch this magical garden through the coming months. Did I find inspiration there? Not really. I found peace and pleasure and a break away from writing that we all need every so often. I suppose it could be used as a setting but it's usually people who give me inspiration and ideas. That dragon might come in useful.
Posted by Lynne Hackles at 08:41 2 comments: