Today's post is the final section of my friend Josi's piece on some childhood memories. Enjoy!

Yesterday, when I was young....
We were the “Happy Hoppers”. We went on "Holiday" to Kent every August to pick hops. There were cheap tickets on the railways and we had old fashioned prams to put stuff in because they held a lot and were easy to push. We went every year and were there when war was declared. We didn't go back to Walworth until we were forced to.
Mrs. Tolhurst owned the farm at Paddock Wood where my Dad was a Polepuller. He had to cut the bines that held the hops up until they were ready to pick.
The picking made all your fingers black and sticky and all your food tasted weird because there was nowhere to wash your hands. We knew some lovely people there. They must have been the only real friends my Mum and Dad had because my family was always 'moonlight-flitting'. But every summer there would be the Porter and Collins families from Cable St, East London.
After half a century I would still recognise any of those people.
The four of us slept in a hut about 12' by 12' square. If it rained during the day, we lived in it too. There was one big bed with straw in the mattress. We two kids slept at the foot. Oil lamps, all smoky. Outdoor cooking. Four privies for about two hundred people. So much for hygiene. There wasn't a washbasin with a tap for about two miles. And toilet paper did not exist as we know it.
The Red Cross had a little Hoppers Hospital where first aid was freely given. My Dad was eating a slice of cake one day and rested it on the edge of the bin, (plates were for cissies!) When he bit into the cake he had bitten a wasp in half. The working bit stayed in his tongue. He almost choked and had to hold on tight to a pillion for a motor bike ride to the little cottage hospital at Five Oak Green to get the sting out. That stopped his swearing for a bit.
My Mum was given a grey coat by the lady she cleaned for. She said it was November coloured so she had it dyed maroon. She looked lovely in it, Regal even. She went to Tonbridge for the day and got caught in a downpour. All the red dye ran down her legs and into her shoes. She was helpless with laughing about it but my sister thought she was crying and got hysterical.
Yesterday.......
Posted by Lynne Hackles at 07:39 7 comments:

Here is more from Josi's life. Beneath this are two earlier extracts. Final one tomorrow.

Yesterday, when I was young........
I seemed to be always hungry as a kid. Mum fed us as well and as often as she could.
I would walk down Dalyell Road and smell the privet blossom in one of the hedges. I would peek round the gate to see if there was a bottle of milk on the doorstep. If it was a half pint I would drink it all and take the bottle. If it was the tall one I would drink some and put the bottle back. I had free milk at school too. I don't know how often or how long I did this. One day a big hand picked me up by the shoulder and shook me like an old yellow duster. I looked up and there was this very big policeman, (about eight foot tall I thought.)
I wouldn't tell him where I lived; it was on the same street. So he took me up the road to Bon Marche and across to the police station. They put me behind the counter and I could not see over it. “A terrible crime!”, they said. Milk was rationed in those days. I wasn't seven yet.
They had to go and fetch my Dad. He wouldn't come and get me until after the Greyhound racing on the wireless. I was very hungry and I cried. The police gave me a jug of milk and a glass. I had a sleep. My Dad still hadn't come. I asked for some tea. They gave me some milk to drink. I thought I was in prison for ever.
Finally my Dad dragged me home and I cried all the way. Then I got a good hiding for stealing and probably because his bets went down too. We had to go to Quinn and Axten's shop because some German named Mister Hitler was coming to get us for my being bad, Mum said. And we were in their shelter in the basement when a landmine dropped nearby. It had not exploded so we were all led out by the Wardens. It was like daytime outside, with long streaks of lights all over the sky.
I could see the police station. Every window had a fire in it and it burned right down to the ground that night.
I was very happy.
I have not drunk milk for sixty years.
Posted by Lynne Hackles at 07:04 4 comments:

Yesterday, when I was young...2

Yesterday, when I was young......
I got the cane most Mondays at my new school in Stockwell. The first two or three Mondays I got it for being late after assembly, two stripes on each hand with a cane. After that I got it for insolence. That's what they called it when you can't say why you were late, (or won't.)
On Fridays Mum would give me the two half crowns wrapped in a bit of paper and the receipt to go to the shop on a corner in the Lambeth Walk. I collected the bundle wrapped in a white cotton cloth with a very big pin in the fabric to keep it closed. We had our clean clothes for Mass, altho my sleeves got very short (mum said I was growing too quickly) and we did have to keep them very nice. Sunday night the bundle was placed on the chair in the kitchen near the door so that I could not forget to take it with me in the morning on the way to school. Harvey and Thompson the pawnbroker did not open til 9.
Assembly was at 9. So I got the cane. Just before we broke up for half term the youngest teacher asked me in the playground, "Did I see you in the Lambeth Walk waiting for a shop to open this morning?" I said yes..
"You are there every Monday?” I said yes.
I never got the cane again..
Posted by Lynne Hackles at 10:34 3 comments:

Yesterday, when I was young...

The next few blogs are written by my friend and fellow writer, Josi Birkbeck. Josi is 'getting on in years' and her writing is raw and, I think, beautiful. See what you think.

Yesterday, when I was young...
Real carrier bags made of shiny brown paper with little cotton handles. Every week we would walk from the Walworth Road to Smithfield Market, no mean feat when you are seven and your kid sister is five and a half. My Mum was like a wraith. At Smithfield the chicken man would give my Mum big parcel of offal called giblets. He rolled them up in a newpaper parcel and then put them into the carrier bag. There was a tea wagon near London Bridge and we could have a sip of tea and a custard cream each before we crossed over the bridge. I used to look through the bridge railings up the river at the ships unloading at the back of Tooley Street.
Then we walked home again. It would take all morning.
I would help my Mum separate and wash all the parts of the meat. There were five kinds. Mum would be happy if there were lots of livers so we could all have them for tea that day. Then we helped to wash them all and cook each type seperately. Mum would make a pie for the next day and a big soup for the day after that. Every time Mum would say, "The best sixpence I could ever spend."
The giblets would just about last the week. Sometimes the man who served my Mum at Smithfield Market would slip in some other chicken part, like a leg or breast, and when she opened the parcel on the scrubbed kitchen table she would give this lovely smile. Every week. My Mum didn't have much else to smile about.
Posted by Lynne Hackles at 09:33 6 comments:

And the winner is... 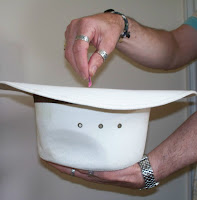 ...seen here being pulled out of the Boss Hogg hat.

I'll send you a copy of Ghostwriting, Ceka, if you let me have your address. Contact me at lynnehackles at onetel dot com

70% of nothing is nothing

Take a look at this link -http://www.booktrade.info/i.php/34122 and read about some of the realities of self-publishing. One of the biggest self-publishing companies admits that is has published the worst collections of poetry the world has ever known - not that the world will read it as most books only sell to friends and family of the so called author.
It's as a writing friend said to me the other day, 'The public are now reading the slush pile'.
And a non writing friend said she had been given a novel to read and if it had been her first she'd never have read another book. I knew the author and had to explain about real publishing and self-publishing. The public don't know the difference but most know good from bad.
I'm not saying all self-publishing is bad but do read the link. I could have written it myself, but didn't. And I didn't ghost it either!
Posted by Lynne Hackles at 07:40 3 comments:

And here she is! Lorraine Mace, fellow columnist in Writing Magazine.

Lorraine kindly asked me to contribute to her blog. The subject, Ghostwriting. Thanks, Lorraine. You can find me over on

A reminder. You still have a chance to win a copy of my book, Ghostwriting - How To Write For Others. Just visit the blog entry two below this one and answer a ridiculously simple question, or copy everybody else's answer and I'll pull a name out of a hat - yes, a real hat, on June 10th.

And in case you missed it, I've a double page spread about ghosting in the new Writing Magazine.