You cannot hope to bribe or twist,
Thank God, the British journalist.
But, seeing what the man will do
Unbribed, there's no occasion to. 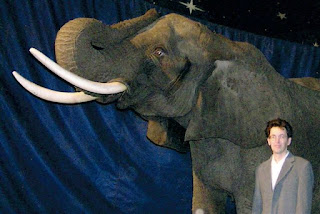 You're probably fed up with hearing about me and my television appearance, and big win, on Deal or No Deal so I won't mention it (even though it was six years ago last Tuesday). Instead I'll tell you that DOUGLAS McPHERSON IS ON TV TONIGHT.
Viewers in the East of England will be able to see Douglas, Writer's Forum columnist, on TV this evening (Monday 26, November) talking about the past and future of animals in the circus.


It's a subject Douglas researched extensively in his book, Circus Mania, which is now available on Kindle (link: http://www.amazon.co.uk/Circus-Mania-Ultimate-Dreamed-ebook/dp/B0095TD090/ref=tmm_kin_title_0 ).
The programme is an Inside Out East special at 7.30pm on BBC1 in East Anglia. It can also be seen on the BBC iPlayer for the next seven days.

Posted by Lynne Hackles at 08:18 No comments: 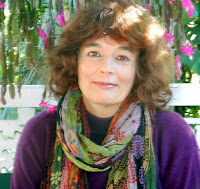 Thanks for agreeing to answer some questions about your writing life, Sis. How long have you been writing?
When I was a child, my sisters and I would write short skits to perform at our annual Christmas show at home, when my uncle and aunt visited from Sydney.
Then at high school, I wrote essays, poems and stories for the school magazine but it was when I turned fifty that I actually gave myself permission to be a writer.
When and where did you get your first acceptance?
My first acceptance was a story in Australia’s Woman’s Day magazine. Fiction editor, Julie Redlich had a policy of encouraging and fostering new writers, for which I am very grateful. This was in 2001.
Did you ever imagine you would sell so many short stories, especially last year when you sold how many?
Every year I’ve simply aimed to do better than the previous year. This has meant finding new markets, learning how to adapt stories for overseas magazines, and learning to take rejections on the chin (Still working on that one). Last year I was lucky enough to sell 57 stories. I believe there’s always an element of luck involved – quite a few of these had previously been rejected.
And you write articles for Writers’ Forum. How did that come about and would you say you had a USP?
I was fortunate to have Jean Currie as my mentor in the early days. She suggested I send a piece to Writers’ Forum when Carl Styants took over as editor. He accepted it half an hour after it hit his inbox. Before I could sit on my laurels, Jean said, ‘What are you going to send him next?’ Now I’m still always thinking of what to send him next.
Being an Australian writer gives me an opportunity to provide local market info not easily obtained in the UK.
What about steam trains? I’ve seen an article of yours in a steam magazine. It seems a bit of a leap from womag to steam. How did that happen?
Flying Scotsman was brought to Australia by ship for our Bicentennial celebrations in 1988. Like many Australians, I loved watching it steaming through our local railway tunnels. Then by chance, years later, I met the English driver, who now lives in Brisbane. I knew immediately that his anecdotes about those months in Australia needed to be written down. It was fascinating stuff. And he’s a photographer, so there was no shortage of illustrations. It took me two years to find a home for my article. I started with the women’s magazines, but of course, the story I wanted to tell was a man’s story. It found a home in Steam Railway. My challenge for 2013 is to work out how to turn this piece into an ebook. There’ll be lots of extra photos and new material – and a steep learning curve for me.
Would you like to come to the UK and visit some writing friends here?
Is that really a question? There are few things I’d enjoy more. It’d need to be in your summer, of course – and I’d love to go to Writers' Holiday at Caerleon.
Posted by Lynne Hackles at 10:43 4 comments:

In the first paragraph of a short story, or on the first page of a novel you have a hook which draws readers in. It keeps them reading. I tried the same technique on my blog by referring to Cedric. And, as you all wanted to know who he is I'll tell you.
When my brother, Phil, was six years old he bought Cedric from a jumble sale. (My brother is now approaching sixty.) I don't know what he paid but he sold Cedric to me for sixpence (old money) and Phil never did anything, even at that tender age, without making a profit.


Cedric was an ornament for many years but one day, after I'd read a book about decluttering and set about  doing some, I realised that Cedric was neither beautiful nor useful and, according to the rules, would have to go. I took another look at him, his slender neck, his poor broken beak. I thought of the many years we'd spent together and decided to keep him. All I needed to do was find him a job and he'd become useful . Guess what he became really good at? 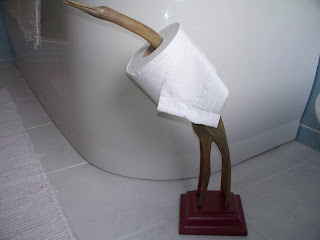 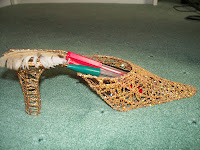 I've been having a look around to see if I could find something to amuse you and I came up with this.


I bought this golden slipper from a junk/antique shop. 'What do you want that for?' asked the LSO. I didn't really know at the time but now it's proving useful as a pen holder on my desk.
And what are these? A couple of useful tools. The green pointing finger is a pen and it lights up in the dark so no more scrawling notes in the pitch blackness. And no, that's not a feather. It's a keyboard cleaner. 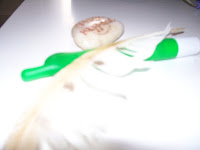 And those of you with sharp sight will note that in the background is a pebble. It was given to me by my good friend, Sue Johnson, and on it, in gold, it says Magic Happens.


Perhaps I'll show you Cedric soon. I've had him a very long time and he's very useful.
Posted by Lynne Hackles at 10:56 5 comments: 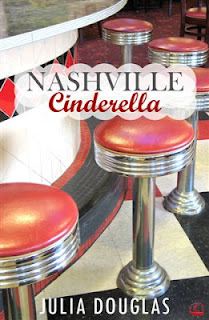 If the names Carrie Underwood, Taylor Swift and Brad Paisley mean anything to you, you’ll know that tonight (November 1) is country music’s biggest night, the occasion of the 46th annual CMA Awards, which are Nashville’s equivalent of the Oscars. It’s also the night Julia Douglas has chosen to launch her new ebook, Nashville Cinderella, so I thought I’d pull on my line dancing boots, say howdy and ask her a few questions.
So, Julia, what’s Nashville Cinderella all about?

“Well, it’s a Cinderella story set in Nashville! Cindy is a singing waitress working in a retro-themed diner in the heart of Music City while dreaming of finding love and fame as a country star. The short order cook is her Buttons figure and Prince Charming is her vintage suit-wearing, 1957 Chevrolet-driving manager Hank. But can he get her to the ball, or in this case the CMA Awards?”

Why did you choose Nashville as a setting?

“I’ve always been fascinated by the fact that absolutely everyone in Nashville is trying to be a singer or songwriter while holding down jobs as secretaries and waitresses. As one of the characters says in the book, if you want to meet a great singer in Nashville, just shout, ‘Waiter!’ They all know and support each other, so I wanted to write about a group of friends in that situation, their efforts to make the big time - and all their romantic ups and downs, of course!”

Have you met many country stars in real life?

“The most memorable would have to be Dolly Parton, who was exactly as you’d expect her to be. I’ve heard from other singers that she never stops being Dolly. Even at rehearsals and recording sessions she’s always in full wig and rhinestones. As a bit of fun for country fans, I actually wrote a walk-on part for Dolly in Nashville Cinderella, and there are a few other real life country stars in there that the fans should have fun spotting.”

Where can readers buy Nashville Cinderella?

“It’s available to download from all the major digital platforms such as Amazon and iBookstore, so if you’re annoyed that the BBC don’t broadcast the CMA awards in the UK, you can console yourself by downloading a little bit of Nashville life instead!”

Posted by Lynne Hackles at 08:52 No comments: