From typewriter to e-book and out soon 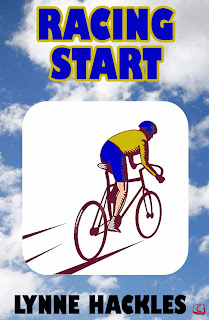 Back in 1989 I wrote Racing Start on a manual typewriter. It was published by Blackie in 1991.

Last year I was asked several times to sign copies of the book when I was at cycle races. It made me think about updating it and getting it out there again.

It's out soon, with this new cover and as an e-book.


Joe Astley is thirteen, undersized and useless at football. His father, an ex-professional footballer, would like Joe to follow in his footsteps but Joe wants to become a racing cyclist. He needs to prove to his dad that he is good at cycling and, at the same time, defeat the school bully.


Joe’s life turns around when he meets Sid, coach to the local cycling club. With a little help and a lot of determination Joe sets out to achieve his dreams but it’s not easy with the school bully as his biggest rival.
This novel is as fast-paced as the racing, and packed with insights into starting out in the cycling world.

A step back in techno-time

I have just realised why my thumbnail has a dent in the tip. It’s from texting. Who came up with this silly idea and can you add to my list of why texting is stupid?


2.      It’s only one step away from Morse Code. Before we could speak to people via a telephone we used dot dot dot dash etc. Now we can speak but we text instead. Where’s the sense in that?


3.      People do it when driving. I nearly dragged a woman out of her car when I saw driving and texting with a small child sitting in the front passenger seat. The lights changed to red, she nearly missed that and the red light gave me the opportunity to leap out and give her a lecture. I managed to restrain myself.


4.      People text when crossing busy roads. I’ve avoided several texters recently. When I was in a hospital waiting room a young man, with broken nose and two black eyes, was texting next to me. When he was called he stood up, still on his phone, and walked into a pillar. The nurse later told me his first injuries had been caused when he was texting and walked into a wall. Some people never learn.


5.      Texting hurts my thumb. Repetitive strain injury is a real threat but I don’t text enough for that. Perhaps I should say it’s damaging my thumbnail. I’m a bit vain about my hands.


6.      Text speak can be misunderstood. Example. ‘Sorry yr dog died. LOL’ Could be Laughing Out Loud.


7.      And what about predicted text? Who wants a machine that thinks for you? Not me. My brother gave me a phone because no-one could work out how to switch off predicted text. I thought I’d managed it and began a text to thank him for the phone. I wanted Hi Phil. I got Hi Pig.
OK. It’s useful. The recipient of a text can pick it up at their convenience. If you’re busy you can ignore a text and save it for later. But how about a service where you could chose between phoning someone or simply leaving them a short voice message? Instead of Create Text we could have Create Voice Message and save all that bloody beeping and thumbnail damaging.

Authors for the Philippines

http://authorsforphilippines.wordpress.com/   Go visit and make a donation or a bid. 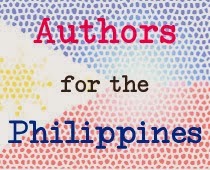 ﻿
You can put in a bid on all three of my books on this site. There are many other writing related goodies too. Take a look, make a bid and make a difference. 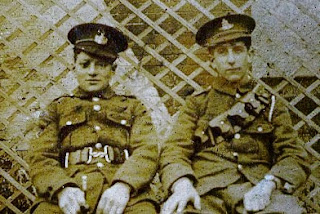 My Uncle Tom (on the right) has been dead for many years now. When he was in his early nineties he was taken into hospital.
‘We can’t find any record of you having been in hospital before,’ said the consultant.
Uncle Tom thought for a moment and replied, ‘Last time was in 1918 when I got gassed.’

He wasn't my real uncle. He was my grandfather's best friend. Grandad is on the left. He joined up and went to fight in the Great War when the Bantams were formed. Soldiers under five feet two inches. Previous to that, small men weren't eligible for the forces.

They look barely out of school here, proud in their uniforms. Thankfully, though Tom was gassed and Grandad was wounded, they both survived.

Last week I had to have an ECG. The nurse said I should go behind the screen and take off my sweater. ‘And are you wearing tights?’ she asked, looking at my legs. (Judge for yourselves.) I was so tempted to say no. 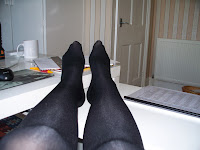 I was even more tempted to tell her I was of mixed race – white at the top and black at the bottom.
Don't you think nurses should be more observant?
Posted by Lynne Hackles at 12:07 5 comments: