'There's something living in there,' says the LSO (Long Suffering One). And I immediately go into Steven King mode. What is it? A ghost, a living corpse, an alien?
Being just the two of us over Christmas we can do what we want so we decided to knock down a wall in the bedroom with the idea of creating more space, using the eaves, in which to fit a small en-suite. We removed a fitted wardrobe and then knocked a hole in the wall. Excitedly, we shone the torch through the hole. I'm a writer - there could have been treasure from past residents, a portal to another time or universe...
No. There was nothing exciting. There was this. 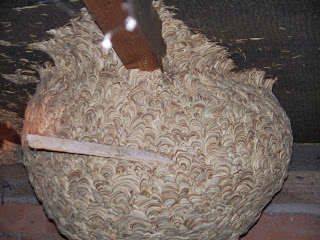 The sliver of wood piercing the structure is a piece we knocked out. It lodged itself in but hopefully didn't awaken anything sleeping in the nest. If it does then we're in deep doo-doo as it's Christmas and the council pest control officer won't be working until next year. Meanwhile we are stuck with a giant nest. Want to rehome some wasps, anyone?
Posted by Lynne Hackles at 17:28 7 comments:

Happy Mithras everyone. And no, I'm not drunk or slurring my words.


Mithras was the son of god, born to a virgin on December 25th, died and rose again, had twelve devoted followers… Sound familiar? Mithras was alive about a millennia before Jesus.


I first met Mithras when reading a Merrily Watkins mystery by one of my all-time favourite authors, Phil Rickman. This one was called The Secrets of Pain. I love books that make you think and go and research some new thing you’ve encountered.
Posted by Lynne Hackles at 12:28 7 comments:

We bumped into a friend who runs a café. He’d been shopping and showed us the end of a hosepipe, the spray bit. He’d bought it at a large store. ‘It was only 20p,’ he told us.


‘At that price you could buy a couple of dozen and give them away with your Full English,’ said the LSO (Long Suffering One).


Our friend thought for a moment and then said, ‘No, it would be too much hassle. I’d need to put all the breakfasts up by 20p.’
Posted by Lynne Hackles at 10:00 2 comments: