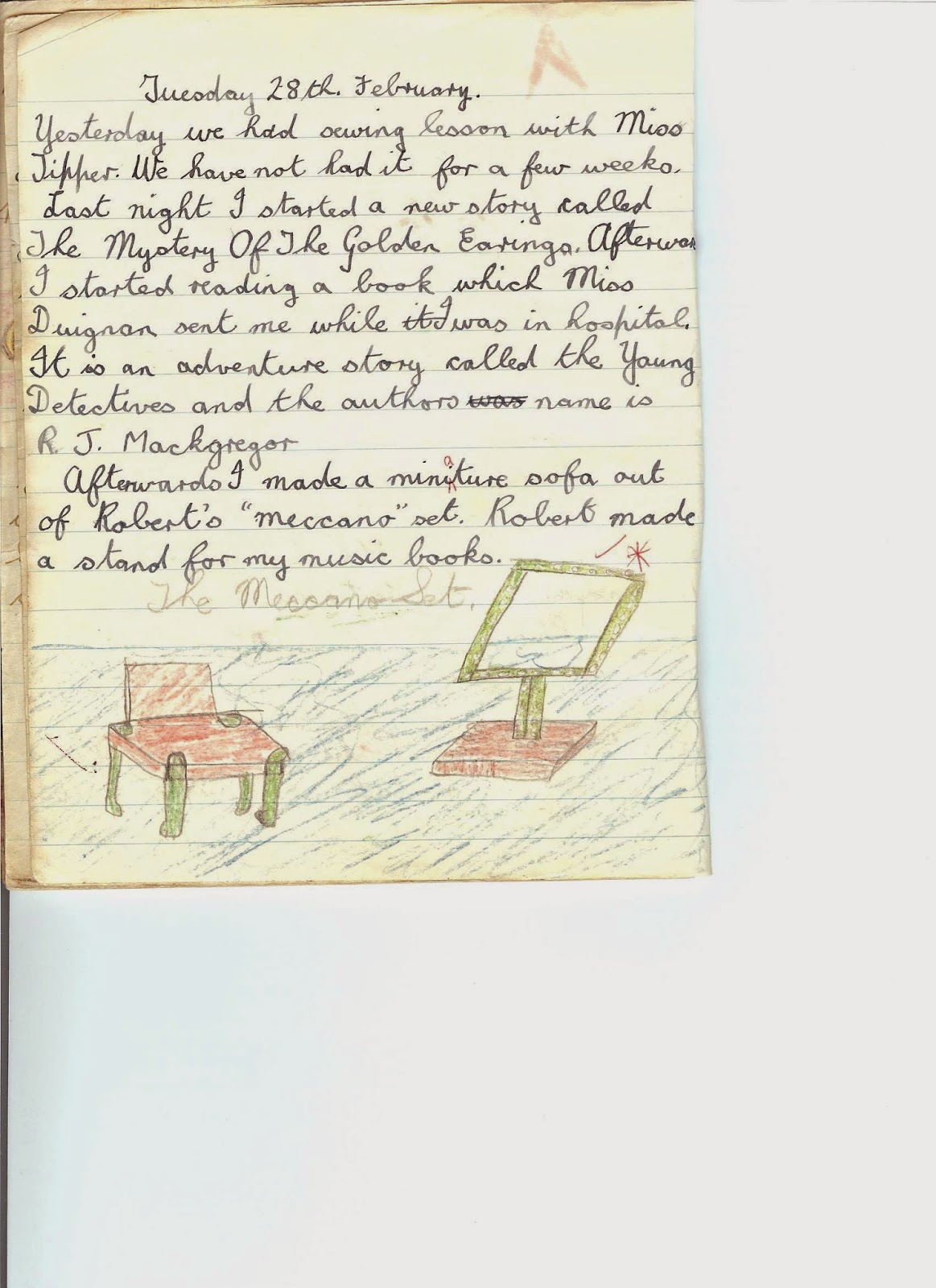 I was searching through my school diary to see which secrets I wanted to share with you. March 1st seemed apt because of the picture.

There’s a problem with the second line of this entry. We have not had it (sewing lesson) for a few weeks. You cannot hear the joy in those words. My great-grandmother sewed for a living. In her later years her hands were swollen and mis-shaped from arthritis, curved as if they were still clutching a needle. The sewing gene wasn’t passed on to me. I remember those lessons and my hot and sweaty little hands trying to grip the needle. Miss Tipper used to let me go out of the classroom to wash my hands under the cold tap but the freezing water didn’t work any magic. I still don’t like sewing.

To draw a picture of a classroom, or any of my attempts at sewing would have required the drawing of people so I opted out and added a bit about my brother’s Meccano set. This is the ‘apt’ bit because Tracy Baines recently gave the LSO the name of Meccano Man, saying that if he was cut open his heart would look like it was made of Meccano now that he has so many stents in it.

My music stand? I wanted to play piano but we didn’t have one. When we did get one my Dad told me not to write about it in my diary. Why? I’m not telling. Oh, well, maybe later.
Posted by Lynne Hackles at 11:29 3 comments:

I do not wish you a happy Christmas

No. I don't. I'd like to wish you all a happy day every day.
I don't like Christmas and don't celebrate it but if you want to then it's fine by me. Each to their own. I do not understand those people who, on Escape To The Country, want a dining room that will be good for Xmas day. What about the other 364/5 days a year? They are all important so here am I wishing you Happy Days.


Post something controversial, says Brian Feinblum.
http://bookmarketingbuzzblog.blogspot.co.uk/
on his list of blogging suggestions. So here it comes. The following is from an NHS feed that arrives on my laptop, and has done since I bought it.

The global surge in ADHD [attention deficit hyperactivity disorder] diagnosis has more to do with marketing than medicine, according to experts. .
ADHD is being medicalised – that is, for a variety of reasons, children who may be simply "naughty" and high spirited are being misdiagnosed with ADHD, and are wrongly being treated with powerful medications such as methylphenidate, better known as Ritalin.
This study concludes that the "global expansion" of ADHD and its subsequent medicalisation has been driven by five major causes:
drug industry lobbying
This is a well-researched and interesting article which reflects current concerns about the medicalisation of symptoms that might be viewed as part of the human condition, rather than a disorder that needs drug treatment.

At the end of this it said it was an opinion piece and not the last word on this controversial subject. Here’s the last (controversial and maybe even tongue-in-cheek) word from me.
There were a couple of kids when I went to school who would be diagnosed with ADHD now. They were fortunate and got cured. The Headteacher’s cane worked a treat.
Posted by Lynne Hackles at 08:16 4 comments:


Andy tells us about the school play. His daughter, four year old Amelia, is a Townspeoples. (No, I haven’t spelled it wrongly.) He wasn’t too sure what that meant. He had also thought that the main parts in a nativity play belonged to Mary and Joseph. Not in this one. The Innkeeper’s Cat stole the show.

Just one of the many things that have cheered us over the past three days. Colin is now home after having another three stents. He now has nine in all and has to go back for another next year. These are keeping his arteries open and his heart working. Once again the heart ward was full of men who didn’t smoke and weren’t overweight. Colin’s problem is hereditary.

We have had so many lovely messages from friends and family. It’s made us realise once again how lucky we are.

Thank you to everyone who sent us good wishes.

The LSO has a habit of asking me questions when I am in the middle of my ablutions (good old fashioned word). ‘Why do you always want a conversation with me when I’m cleaning my teeth?’ I asked him.
His reply – ‘It’s the only chance I get to speak.’


I don’t need subtitles but I love reading them because they hold so many silly mistakes. How about?
Zoe Ball : ‘That’s a lovely tie.’
Subtitle : ‘That’s a lovely Thai.’
And what about this little gem?
Who or what was meant by Pepsi cans it? (Find the answer after Sue’s giggle.)


A group of us had just started looking around this stately home. One of the crowd was looking at a beautiful piece of furniture, a gorgeous chest of drawers. "Ooh I wonder what it says about this piece," she says, putting her hand on top and leaning forward to read the notice. She leaps back, blushing. "Please don't touch the furniture," the notice proclaimed.