Write about dogs, kids, chocolate, sex, and life-death issues -- but somehow link these popular things to your blog’s theme. That’s another suggestion from Brian Feinblum on things to blog about. And today’s choice is Chocolate. As my blog doesn’t have a theme, unless you call my ramblings one, then I’ll feel free to write about chocolate, or lack of it.


The current lack of chocolate in my life is down to two things. Cadbury’s and a diet.


I refuse to indulge in a crème egg if the chocolate is not of the same quality I’ve always had. I just knew there’d be problems once an American company took over Cadbury. First of all they disposed of the gold coins we all had in our Christmas stockings. Now they’re messing with our eggs and that makes it easier to say I will not be eating their eggs this year or any time again until the proper chocolate is reinstated.


Now to the diet. I’m back on the C-Plan which I invented and Jane Wenham-Jones put in her book, 100 Ways to Fight The Flab. Think about it for a moment. So many of the good, but fatty things, begin with C. The diet’s rule states you eat nothing beginning with C unless it’s a fruit or vegetable. (Being life-long vegetarian, chicken doesn’t come into it for me.) So no Chocolate, Cake, Cream, Cheese, Crackers, Choc-chip Cookies… I’m sure you can add to the list.


And this time I am not going to cheat and call Chips French Fries. Or Cake gateau.
100 Ways to Fight the Flab - and still have wine and chocolate.  On kindle, e formats and in paperback
Posted by Lynne Hackles at 09:48 3 comments:

Day 22. Will life ever be normal again?

It’s Day 22 of The Cough. And I’m going to have a bloody good moan about it. I cough day and night. I’ve drunk two bottles of cough mixture and have a discarded one that I dare not touch again. It promised a night’s sleep. I got sixteen hours and another 24 zombie like ones. My ribs hurt, my back hurts, every effing thing hurts. Even my dignity. After years of pelvic floor exercising I’ve had to revert to Tena Lady. Yes, my hacking is that bad.


The LSO is OK during daylight hours but coughs during the night and we can’t seem to synchronise it. He’s quiet, I bark. I am quiet for a few moments and he hacks away. This was the reason why I suggested, only half jokingly, that we had a suicide pact. Well, it was 4am and we all know that no decisions should be made at that time of the morning.


I watch crap television into the early hours and until my eyelids droop but then only get approximately three hours sleep each night. I look a hundred years old and I am fed up.


Please read this and forget it. PLEASE don’t tell me honey and lemon will work, or an inhalation of whatever or suggest I sip any sort of concoction. Nothing works. But this moan has done me good. I know a lot of people have this Three Week (and more) Cough so do feel free to leave a moaning comment.
Posted by Lynne Hackles at 09:11 4 comments:

Happy New Year and here is the January giggle blog


The piano story. (see post below)
I was nine years old and wanted a piano. I begged, pleaded, sulked and finally got one but Dad told me not to write in my school diary about how I got it.
The piano arrived on the back of a truck. The keys were a bit yellow but I didn’t know about nicotine back then. There was candelabrum on both sides of this shiny brown upright. A local pub had thrown it out and Dad had decided to rescue it. I think my teacher might have admired my Dad’s resourcefulness but he didn’t want an embroidered version appearing in my school book. I can now understand why because looking at one entry (below) it’s a wonder the teacher didn’t send the police around to our house. 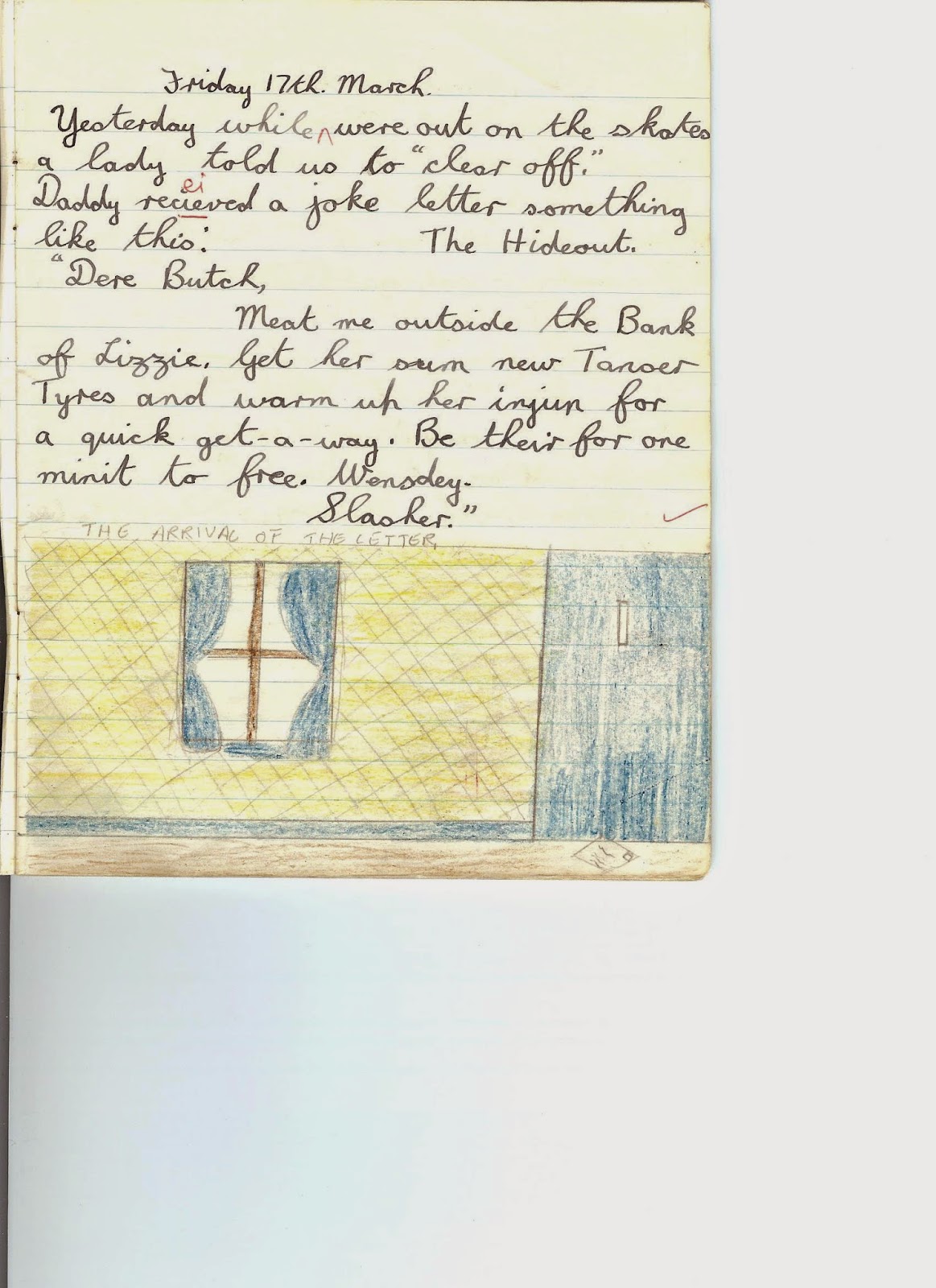 Our 'front' room wasn't bare but I couldn't be bothered to draw in any furniture.

And from Sue Blackburn


My grandson (11) was playing Christmas Carols on his saxophone and we were singing along happily and I was thinking this is real old fashioned entertainment. Then Leo sorted through his music. "Here's one Granny Sue should recognise, Mum, cos it's old," says he blithely.
Out of the mouths of babes eh!