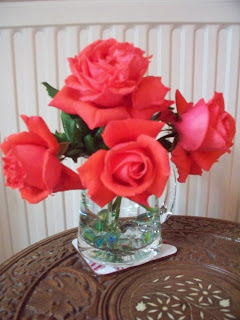 The roses aren’t pink and they aren’t red or even orange but a mixture of the three and a colour nothing man-made can match. I pick four for the lounge. Their fragrance fills the room and each time I enter I stop to drink in their perfume and beauty.

To share time with fellow writer, Anita Loughrey. We talk and talk and talk. ‘What time is it?’ I eventually ask. ‘Ten past midnight,’ she tells me and we are amazed how the time has passed.

An elderly lady looks as if she has been abandoned outside the station. Her taxi hasn’t turned up. I use my mobile to call one for her and notice that beneath her coat she is has a long blue skirt and, at her neck, a cross and chain. She is a nun. I tell her the taxi driver is called Nick, but not Old Nick. She laughs, thanks me and tells me I am growing wings. Later my back itches. I can feel my wings-buds.
Posted by Lynne Hackles at 06:09 4 comments:

Sometimes you can be too helpful

A lessons I have learned about being too helpful.
Do not help any female stranger - as I did - if you see their skirt tucked into their knickers. In hindsight I should have whispered something discreetly. I didn’t. I stood behind her and pulled her skirt out. It’s a good job my reactions are quick because she turned around in alarm and attempted to slap me. I ducked. Last time I’ll be doing that.
But I nearly did a repeat when I saw a man walking in front of me. He was wearing new jeans and the price ticket was still on the back pocket. I was about to rip it off but stopped myself.
They were expensive jeans. I let him walk and brag.

Picked on a sunny day so when the rain returned I still had sunshine. 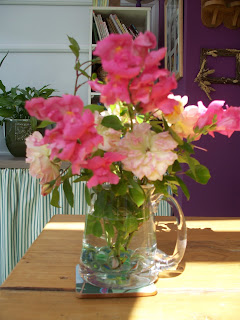 And now I’ve mentioned sunshine let me tell the short story writers among you that fewer stories are sent out during the summer months. I was once told this by an editor who, when I was out of breath when answering the phone, said accusingly, ‘You were in the garden, weren’t you?’
He then went on to tell me that most of his writers were part-timers and would spend their spare time outside when the sun shone – hence fewer stories sent out.


In case you were wondering, he was right. I was in the garden when the phone rang.
Posted by Lynne Hackles at 19:10 3 comments:

Fox, Wiggo and me.

Our fox doesn’t look too good. He’s lost his brush and his tail is now bare and rope-like. He can still move quickly though. As soon as he spotted me with the camera he disappeared at speed. 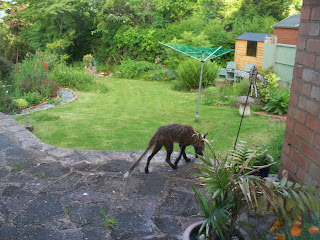 Talking of speed, I was cheering on Sir Bradley Wiggins last night when he beat the hour record. In my own tiny way, I know how much that hurts because when I was writing the original Racing Start (published by Blackie back in 1991 – the new fully updated version is now on Kindle) I did a time-trial for research purposes. I began the ten mile circuit in too big a gear and as fast as I could manage. Once out of sight of the start line I slowed, then I went faster and I kept up this slow, slow, quick, quick, slow pace until I reached a hill and had to get off and push. I reached the finish line, gasping for breath and with my heart jumping into my throat. At this point entrants are supposed to shout out their number. I didn’t have enough breath to do that but they clocked me in anyway at a massive 38 minutes – for ten miles. I had all the information I needed after that first ten miles but went on to compete in more time-trials until I got where I wanted – ten miles in thirty minutes.  That would translate to 20 miles per hour. Last night Bradley managed almost 34 miles in an hour. (33miles, 1543 plus yards or 54.52 kms.) Respect!
Posted by Lynne Hackles at 07:36 6 comments:

I look past the torrential rain to admire the rainbow and remember the words of an old farmer when he heard me complaining about the wet weather – ‘We need the rain to fatten the little taters.’

In the garden at twilight and The LSO and I stand perfectly still as a teenage fox trots between us. His fur is almost stripy, red with black streaks, as if he’s been the victim of a trainee hairdresser. He’s on his nightly wander which sometimes includes peering through our patio doors.

The LSO fetches a chair so that I can rest my back while he continues weeding. Our house is on the slopes of the Malvern Hills – the hills that were, long ago, believed to be a giant altar. I take off my shoes and wriggle bare feet in the grass, imagining the strength and magic beneath me.
Posted by Lynne Hackles at 07:12 5 comments: