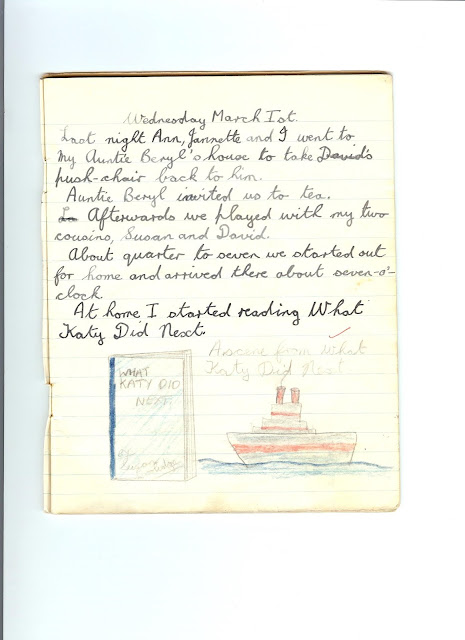 There are a few mysteries in this entry. I remember Ann. She lived in the next street and, after going to St John’s Junior School together, we went to grammar school together too. But who is Janette? I have no idea. I also don’t have a clue why David’s pushchair had to be returned. He must have been about a year old at this time.
This one is a bit of a boring entry. Perhaps I wasn’t feeling well and my imagination didn’t kick in. I always tried to keep the teacher amused. Or perhaps we did something we shouldn’t have on the way home. We’d have gone through the churchyard, using it as a short-cut. Ann always swore there was a grave there that had the inscription – ‘Fart free wherever you be, For the squeeze of a fart was the death of me’. I’d definitely have censored that bit. We never found that grave but if I returned there now I'd still search for it.

My husband of lifetimes is known to many as the Long Suffering One, or LSO. No-one has ever suggested that the name doesn’t suit him. Here are a few reasons why.

I was so disgusted after a stay in hospital that I wrote to the local paper. A reporter phoned me. I explained that the doctors and nurses were wonderful. I then went on to relate the story of the meals served up, describing the vegetable risotto as some cheap rice boiled in the water from the cleaner’s mop bucket, with a razor-thin slice of mushroom and a single pea added. The baked potato, I suggested, was something picked up off the floor of the operating theatre where someone had been castrated.
The following day the LSO and I were walking towards a newsagent’s when he spotted the A-frame board outside. On it were the words – Local Woman’s Hospital Nightmare.
‘I hope that’s not you,’ he said.
It was.

When the LSO had his heart attacks I wrote about them in one of my regular columns, sold a proposal for a book by using them – the editor said she didn’t usually laugh on a Friday afternoon – and then sold a story to one of the ‘psychic’ type of magazines because we’d both had the same dream about his father coming to visit him in the cardiac care ward. When a copy of the magazine arrived in the post I tried to hide it from him. On the front cover it said – Colin’s horror as dead dad comes to get him.

When I was on Deal or No Deal, not long after those heart attacks, the LSO was sitting in the audience holding hands with Anita Loughrey. It was a tense show – possibly for everyone except me. I was enjoying every second. When there was a break in filming, Noel Edmonds suggested we get some fresh air. When we were outside I told him about Colin’s brush with death – cardiac arrest and multiple heart attacks. ‘You’re enough to give him another one,’ he said as he rushed back into the studio to check on him.

Now, do you think the name suits?
Posted by Lynne Hackles at 09:06 9 comments:

The Badly Behaved Clock - a history.

I saw the clock in a shop window. How come I’d never noticed the shop before. Anyway, the clock had a label on it saying – SALE! £100 OFF. How could I resist such a bargain?
In I went, for a closer look. My grandparents used to have a very similar clock. Perhaps that’s why I was drawn to it. When I was in my pre-school era Grandad would lift me up to watch the pendulum swing and I’d hold my breath, waiting for the hour or half-hour to chime.
Gran had often been heard to say that Grandad would do anything for his grandchildren. ‘He’d give them the clock off the wall,’ she’d said. Such memories.
When I left that shop the clock, all boxed up, was under my arm. The LSO (Long Suffering One) hung it on the living room wall that night. He attached the pendulum and I wound it with the big black key.
When it struck for that very first time all we could do was stare at each other. ‘You’re taking that back tomorrow,’ said the LSO. 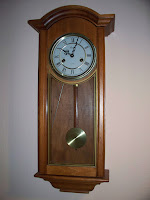 ‘I am,’ I said. My ears were ringing. The chime had made the wall vibrate. It was deafening. The next morning I put the clock back in its box and set off for the shop. It wasn’t there.
The place was boarded up and a sign across the front said CLOSED DOWN.
The clock got taken home.
We would stop the pendulum each night otherwise there was no chance of sleep. A neighbour, living 100 yards from us, asked us if we could hear a church clock chiming. The clock kept good time but, after a few weeks it began chiming erratically. Friends began phoning us just before the hour so that they could count the strikes. Three at ten-o’clock, six at four. I fell in love with this badly behaved timekeeper.
When we moved house it settled down to striking an hour out. At mid-day we’d get eleven strikes. When we moved house again it pleased itself. Then it broke. That £100 I’d saved was the cost of fixing it. The repair man smiled. ‘Lovely clock and it’s fixed now.’
Oh, the disappointment when the clock struck three at three, four at four. Boring! But there was no need to worry. It behaved for about a week and then, one morning, as I set the pendulum swinging – we still had to stop it at night in order to get any sleep – it struck thirteen. All day it pleased itself and it’s been doing so ever since.
I’ve waited for thirteen to strike again. After all, shouldn’t something magical happen? No luck yet but, last week,  it struck fourteen times.

Lynne's Secret diary - into reading, writing but not Meccano 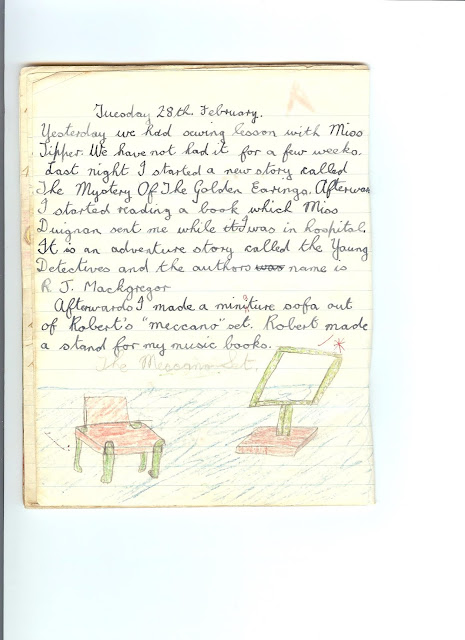 
Miss Tipper and Miss Duignan were both inspiring teachers though even the amazing Miss Tipper couldn’t interest me in sewing. There’s a little sensible editing going on in this entry. When mentioning the sewing lesson I wrote – ‘We have not had it for a few weeks.’ What was omitted was a huge HURRAY! I really wanted to add this in enormous curly capitals, using a bright red pen.
As for The Mystery Of The Golden Earings, was this a book I began reading or could it have been a story I started writing? Either is possible but I can’t remember now though I still remember the book Miss Duignan sent me. It was about a group of children in a big empty house where there was a chest you could climb into and then open a trapdoor which led down to caves and the kids caught the smugglers without the help of police or any other adults.
The hospital stay mentioned was when I had ‘plastic surgery’ on my face. I’d made a complete mess of it in an accident. I’d mastered riding my bicycle with no hands on the handlebars and thought I could master an added extra. No hands on the bars plus no feet on the pedals. It was such a shame the road had been re-gravelled only the day before. That gravel came to the surface of my skin for over two years and then I had the op’ to cover a gash in the eyebrow, another from my nose to my mouth and then to open my left eye by lifting the lid which had been cut in half when I fell. Nothing was done about the hole I’d bitten right through my tongue. It now looks as if I opted out halfway through a piercing.
I no longer have The Young Detectives but I remember the words Miss Duignan had written inside the cover – ‘To Lynne, hoping you’ll soon be back, looking beautiful.’


As for the Meccano, I was as talented at that as I was at sewing.
Posted by Lynne Hackles at 16:24 11 comments:

The following are Mike Dooley’s words that have been changed to become general. I wanted to share them with everyone. In the original of this daily message from the Universe my name appears so that it becomes personal. If you’d like a daily message sign up at www.tut.com


I want you to know that I've ordered up another year for you.
Think I'll call it 2016.
I'm going to put most of the same people from 2015 in it, since you all think so much alike. But there'll also be a few new, very cool cats coming to play - give them some time to grow up though.
And I'm going to have things start off pretty much exactly where they left off in 2015, for continuity's sake. Flips folks out too much when I don't.
All in all, 365 more days in paradise and only one request of you:
DREAM BIGGER.
Coolio,
The Universe
Posted by Lynne Hackles at 12:04 7 comments: